As many of our readers are well aware, Mousebelt, one of the top P-Reps in the ICON Republic, regularly hosts the REIMAGINE virtual conference series aimed at educating the masses about blockchain. The conferences are all free to join, and interviews are shared on Youtube for posterity. Their most recent conference, the ninth so far, took place on June 20.

It was also their first conference featuring ICON as an official sponsor.

“ICON has always been a part of our events in the past, but we weren’t really pushing for sponsors at first. It’s self-funded. We just did it on our own to test and push ourselves to deliver good quality content and interviews,” Adam Leon said of REIMAGINE. Leon is VP of Business Development at Mousebelt.

ICON will also be a sponsor of the upcoming REIMAGINE V10 conference, which will take place in August, as well as the subsequent three upcoming events. Next month’s conference will also be REIMAGINE’s one-year anniversary, something the team is very excited for.

To be clear, ICON, as a sponsor, does not provide any additional funds to Mousebelt. Instead, the P-Rep team reinvests a percentage of their own ICX rewards to help fund production of the conference.

“As a P-Rep, we felt the best use of our rewards would be to contribute back to the ICON community,” Leon said. “And what better way than to designate ICON as a sponsor and highlight the community itself?”

That’s not to say they don’t have sponsors who aren’t kicking in extra funds to the project. Other sponsors, including a few Mousebelt University alumni, are contributing monetarily.

“We had two early-on sponsors and then others kind of caught wind of it. The last two events, V8 and V9, had our most sponsor participation with around 6 sponsors. We’re just growing organically,” Leon said.

Being sponsored helps Mousebelt put out a better production all-around, with the entirety of funds raised going straight into production quality and Mousebelt’s university program. The P-Rep team doesn’t take a cut.

REIMAGINE was born as a reaction to COVID-19 social distancing and lockdowns.

“These conferences are a place where we can promote blockchain and education through video content,” Leon said. “While everybody was stuck at home, we felt like we could make a difference by highlighting all of our partners and projects and leaders in the space.”

By prerecording all the interviews instead of streaming them live, Mousebelt’s goal is to put out the best quality production possible, free from technical errors and edited to remove any loud noises, pauses, etc. It also allows them to be flexible for their speakers by accommodating for all time zones.

And really, as Leon put it, “Does anyone even care if it’s live? It’s cool to do AMAs, but not everybody can take time out of their day to watch it.”

You can check out the video interview with Min Kim below, followed by a few quotes from the other interviews and the panel with links and timestamps for the good parts. The clips are a couple of weeks old, but if you haven’t seen them yet, we can’t recommend any better weekend viewing than this. 😉

(3:02) “We’re finally hitting the strides of interoperability. We are still at the very, very early stages of seeing … value transfer between different public blockchains in general.” … (31:49) “We are positioning ourselves as an aggregator chain, which means that we want to be the plug and play solution for any blockchain or private chain that wants to be interoperable.” — Min Kim, ICON Foundation council member

(12:19) [on community] “We’re essentially creating digital nations. That, I’ve always felt passionate about. Laying down the financial infrastructure, the governance infrastructure and having a strong community that’s actually going to participate is critical.” — Scott Smiley, co-founder of Balanced Network and ICON strategist

(15:52) “I think what we need to do in general, in blockchain, is focus on the developer experience. If we make it easier for developers, adoptions are just going to go through the roof.” — Rob Cannon, CTO of Geometry Labs

reimagining the future, together

We can expect to see REIMAGINED V10 air around mid-August, and we are proud to say that The Iconist will be among those participating in the conference this time around.

The Iconist makes a good fit for REIMAGINE as we share similar educational goals, which Leon summed up quite well: “Blockchain technology is kind of complicated, but how we plan to use it is something that everybody can understand in their daily lives. We’re just promoting innovation here, and that’s pretty simple and straightforward.” 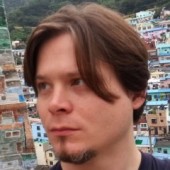 The Iconist 2.0 — Help Us Spread the Word

After a Strong 2018, LINK Looks to the Future

About the Infrequency of Posts…